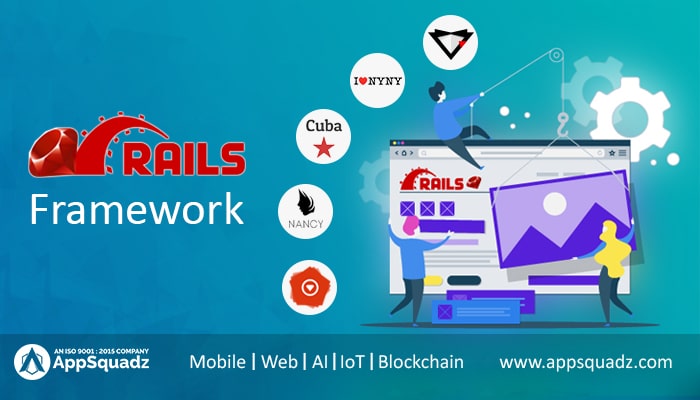 When developing a new application project, picking the appropriate technology stack is indispensable. You have numerous options like Python, Java, PHP, Ruby, and many more for back-end development. Still, in between these which one is the best for your mobile app development project? If you are well-versed with the pros and cons of the technologies, the task of picking between Ruby and other frameworks become more comfortable. In this article, we will start with what is Ruby used for and when it is best applied. Read onto the topic if you don’t know about Ruby on Rails development framework.

What is Ruby, and where is it used?

The principal distinction in Ruby and Ruby on Rails is hidden in their purpose. Ruby is the programming language developed in the 1990s whose main task is fast creation of new projects with high performance. Ruby is a general-purpose programming language like C++ and PHP which is suitable for a wide array of programming tasks. Since 2002, the language has had 1,082 releases and demonstrated excellent results in its repository. This language is being developed steadily and surrounded by a large community. The main advantages of Ruby programming language are widespread community support, user-friendliness, integrity, readability, compliance, and community gems- coding scripts that simplify the development process. Still, building applications practicing only Ruby is a tedious job.

Behind Ruby’s popularity, Rails or Ruby on Rails is named as the chief cause. ROR founded in 2003 is again an open-source framework written in Ruby programming language. The creation of ROR was for programmer comfort and elegant code. While web application development, Ruby on Rails development company doesn’t have to rewrite every single code which decreases time consumed on primary tasks. ROR framework simplifies the process of web app development and mobile app development by taking repetitive tasks off the developers’ shoulders like the creation of forms, tables, and menus. Mobile app developers don’t have to create a new web app or mobile app from scratch as for everyday repetitive tasks they can utilize out-of-the-box solutions.

Why Ruby on Rails is so popular

Ruby on Rails is a trendy framework and has been amongst the top five most popular frameworks for back-end development. The number of websites developed with ROR accounts for more than 350000 globally, and these figures are increasing at a constant pace.

Ruby on Rails: Popularity across Industries

When you are selecting the right back-end framework, open-source status is the first thing to take into consideration. Ruby on Rails is open-source which means it is free and can be accessed by anyone without paying any additional charges. Ruby on Rails developers can download the source code for further practice in the applications they are working on. Since it is open-source, you can also subscribe to the development and success of the framework. If you think that some of the features can make it more useful, you can suggest your contribution to consent. Ruby on Rails has a massive community of talented and highly-experienced developers which produces plenty of free add-ons that can be integrated into applications. The free add-ons are beneficial for startups that aspire to launch a feature-rich app in the most compact time.

In the past few years, we have witnessed success stories of startups that launched their web project on Ruby on Rails. Since it has a vast community, the support you get is rapid as a result of which you can develop solutions more quickly.

Ruby on Rails- Advantages and Drawbacks

Like other technologies, Ruby on Rails also has its strengths and weaknesses, and without knowing this, you can’t make the right decision. When talking about Ruby on Rails development, it is often a difference-maker when weighing the pros and cons. You will find the advantages and drawbacks of this extensive framework below.

Advantages of Ruby on Rails framework

No developer can ignore the winning augments that this back-end framework exhibits. As soon as all of them are integrated, they cut down the development time, making the process more effective. Some of the benefits that Ruby on Rails exhibits are:

When compared to other frameworks, the ecosystem of Ruby on Rails makes it superior. Ruby gems, a Ruby community’s gem hosting service, grants entree to various gems, which can use the pattern of add-ons, libraries, or software snippets. These gems are ready-made solutions for various difficulties that streamline the development procedure.

MVC stands for Model-View-Controller, which is an integral component of the Ruby on Rails framework. This approach distributes the app task in three subsystems, all of which is accountable for a set of actions:

Ruby on Rails developers can employ ready-to-use components of code which interprets the implementation of several features; as a result, the app code is clean and has high readability. As you have limited code to read and sort, all scheduled updates are quick and seamless, making ROR development time and cost-efficient.

Ruby on Rails is built on DRY where if there is a repetitive task, in Ruby on Rails development, you need not write the same code again and again. The framework recognizes monotonous functions in a way that back-end developers can reuse those codes an unlimited number of times.

Scalability is another benefit to consider, which means an app developed on RoR can be scaled to process thousands of requests per second sent by various users. Shopify e-commerce platform is the best example of ROR performance, which handles up to 80k in a second.

Ruby on Rails takes no risks with security concerns and has some security-centric features built-in that make apps guarded against SQL-injections and XSS attacks. Along with this, you will find plenty of gems that address security threats. All of the features discussed earlier consolidate to make Ruby on Rails time and cost-efficient.

RAD stands for Rapid application development, which is another sphere Ruby on Rails is used for and streamlines the process of transformation accommodation.

Ruby code is highly readable and self-documenting, making the development process faster as no need to write separate documentation.

Ruby on Rails has default environments, i.e., production, development, and testing. The development cycle is optimized, and you can test the product at every stage, resulting in fewer bugs and errors that you must be aware of and debug.

Convention over configuration is the critical principle of Ruby on Rails development which lessens the time programmers spend on configuring files. This framework has a set of rules, making it simpler for aspiring Ruby on Rails developers to commence using the framework. Using conventions, the codes become readable and brief, allowing smooth navigation in Ruby on Rails web application.

Drawbacks of Ruby on Rails framework

Despite having lots of benefits, it also comes with a few drawbacks which are equally important when picking the right framework for your project.

Documentation is challenging to seek out with Ruby on Rails framework. This problem is ever-present as only a few developers manage to document everything.

Instead of being fast, Ruby and Rails is not quick as the other majority object-oriented languages. When comparing the runtime speed of ROR with Node.JS and GoLang, Ruby on Rails lags, so runtime speed is the main argument against ROR. But when comparing with Java framework Spring, ROR is in the win-win situation.

Boot speed is one of the frustrating aspects of Ruby on Rails. It may demand a notable amount of time to originate the framework, depending on the number of files and gems utilized. A rails app preloader, spring solved this obstacle still there are some efforts to be made to resolve the problem entirely.

You must have gone through many companies that utilize Ruby on Rails in web application development, rendering support, and shaping the way the framework is being developed. This technology does not serve any specific niche or restricted to some industries, but used to build various types of projects & serve many industries. It offers a wide range of gems that streamline the development process. Ruby on Rails is evolving at a rapid pace, and the most awaited release Ruby version 3.0 is planned for the end of 2019 or commencement of 2020. With this release, we can expect to see Ruby on Rails becoming three times faster in the future as compared with the current version.