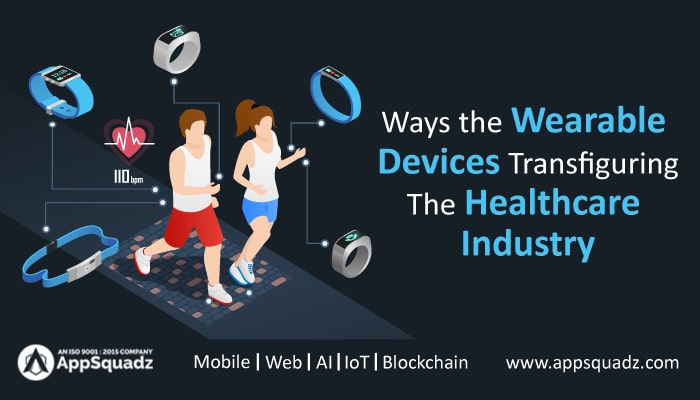 These devices are the perfect solution which is worn continuously on the body that monitors several health parameters, and suitably transmit information about the health conditions to the users and doctors. In the last four years, the use of wearable technology has tripled because of the increasing demand of consumers More than 80% of users are willing to use fitness Wearables- a study from Business Insider Intelligence stated.

Under the influence of medical Wearables, the traditional patient-doctor model is undergoing significant changes. Sensors in wearable devices automate processes, speed up diagnosis procedure, and treatment.

In the past decade, Wearables like fitness bands, Smartwatches, or Google glass are adopted extensively by consumers. As per the current research, by 2027, the wearable technology market is set to reach $150 Billion. These wearable devices are connected to the Internet of Things, (which is again an impactful technology) is disrupting medical practice at a vigorous pace forming a modern era of the healthcare industry.

What is Wearable Health Technology?

Wearable technology is about the electronic devices that users wear for accumulating diverse natures of data of their health conditions that can be used for multiple purposes. These kinds of devices are incredibly user-friendly and unobstructed. Healthcare Industry uses these Wearables extensively; especially Hospitals most often use Wearables. Healthcare sector uses Wearables because doctors and nurses have to keep constant updations of patient’s vitals and conditions that too in very less time.

Some factors that propel the popularity of medical Wearables are:

Where there are so many advantages of wearable devices, then it is obvious it also has some restrictions.

Here are the factors that prevent the implementation of Wearables.

Discussing further, let us move onto way by Wearables are transfiguring healthcare industry and what devices are out in the market and how they are benefitting the users and the doctors.

How wearable devices are driving the healthcare sector:

Wearable Fitness Trackers, one of the simplest and innovative forms of wearable health technology, are wristbands that have in build sensors in it, which keeps track of a user’s physical activity accompanying the heart rate. This wearable device provides recommendations by syncing to several smartphone apps which makes it useful from the perspective of the users.

Presently, Smartwatches have transformed into clinically viable healthcare tool. In 2017, Apple launched the Apple heart study app that observes the heartbeat of the users and alerts those who were experiencing atrial fibrillation. With the Smartwatch, the user may also perform tasks of the routine like reading notifications, send simple messages, and make phone calls. Also, it suggests some of the health tracking benefits of fitness trackers.

Wearable ECG monitors can measure electrocardiograms and send the reading to the user’s doctor, as well as detects atrial fibrillation. Along with this, Wearable ECG Monitors can also track the pace, distance, and elevation. Also, automatic tracking for walking, running, swimming, and biking can also be done with these monitors.

Biosensors are entirely different from wrist trackers and Smartwatches. A biosensor is a self-adhesive application which enables patients to move around while accumulating data on their movement, heart rate, respiratory rate, progress, and temperature. This wearable again has got great potential and ability to improve patient’s outcomes and perhaps lessen staff workload.

[Also Read: Wearable Devices App Development – The Next Big Thing in IT Industry]

Wearable technology has got enormous potential, and this fact is no more a mystery. With lots of dependence of each industry on technology, daily new inventions and discoveries take place to make the functioning of these industries comfortably. The potential that Wearables possess is not hidden in today’s world. People are likely to adopt wearable devices because Wearables have become a trend. Wearable technologies are making a splash in the market due to increased demand. In the fast-moving digital world, if you want to know more or get a wearable application developed that would benefit many, connect to a wearable app development company.