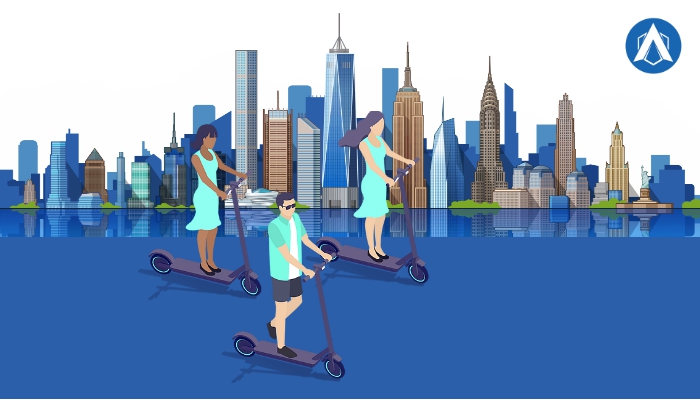 It is expected that the roads of New York will soon be packed with e-Scooters. Since the time Germany has allowed the e-Scooters to be on the streets; New York is poised to take it easy on the idea of legalizing e-Scooters. Soon two-wheeled e-scooter will be seen in the streets of New York. Various e-Scooters app development company has taken charge to provide a dockless electric scooter app for vehicle sharing platform.

The people much like the popularly trending e-Scooters because of its mode of operation through the crowd on the road. It can be operated on the sidewalks amidst the trees. No wonder, the eco-friendly ride offers many benefits on the environmental level and even affect the economy for good, it is still considered an under-rated option to commute. It is also because of the carefree attitude linked with the ride that bothers people walking on the sidewalks and makes it more accessible to accidents.

The lawmakers of states have been working on getting rid of all the restrictions to launch e-Scooters and ebikes, though municipalities are yet to give their green signal for e-Scooter companies with the designated set of rules to go on with the plan. For example, the state-bill may agree to the fact that riders would not need to wear helmets, but the municipalities would require the helmets on! Even the local authorities will take some time to finalize the rule and policies before one can ride an e-Scooter or an e-bike.

What makes it so desirable?

e-Scooters are now linked with companies like Bird, Jump, and many more have a new set of standards to define the terms and conditions to use the e-Scooter. Since the companies are in close association with the local government, they are trying their best to ensure that no local traffic laws are broken to promote and bring the new ride into the states. The labor put in by the companies and other officials have not gone un-witnessed by the government whereas the country is now in favor of having these economic rides on the streets, with the best efforts to maintain the rules and regulations of the roadside.

Effect of legalizations on the eScooter Industry

On the general note, it is good news that e-Scooter rides will be a legal business soon. But the trend is a little different at the city end. Just in case the government agrees to the industry, the cities will have their regulations to allow the scooter companies to act in the cities. The company owners are positive about the spread of the rides once the legalization is completed. They are expecting the business to prosper in many other countries.

With the news that the New York Policymakers have managed to crack the deal to legalize the electric scooters and bikes have proved that New York can take any action to authorize immediately. But the city has its right to prohibit its use in the city. The safety and security on the road is their priority as they say! If you have a plan in your mind to own an E-scooter business, then hire our E-Scooter Mobile App Development Company and have expert app developers for your E-scooters app development.