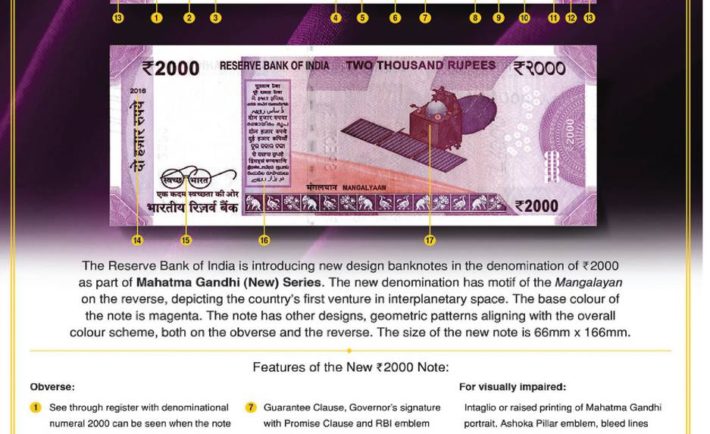 The message says that these notes will be embedded with Nano-GPS chips which will act as a signal reflector, giving the exact location coordinates of the currency in order to track them. In fact the chip is said to be so powerful that one can even track these Rs 2000 denomination notes even if they are stored 120 meters below the ground level.

The chip will also be helpful in identifying when too many of these notes are stored in one place and alert the concerned authorities. Hence, the new note will help prevent corruption and discourage people from hoarding black money. However, whatever message of tracking chips are circulating everywhere are actually hoax.

If you read the RBI’s own description for the Rs 2000 note, they have nowhere mentioned about any such tracking chip. At the press conference also the question was asked about the GPS chip in Rs 2000 notes. The RBI officials straight away dismissed these as false.

India is all set to add one more denomination to its currencies shortly. The Reserve Bank of India (RBI) will be issuing Rs 2,000 currency notes, the highest to come into circulation, even as some experts feel7 high-value denominations should be discontinued to curb black money.

The Rs 2000 currency is designed keeping in mind to eradicate the black money issues using state of the art indigenous nano technology, every Rs. 2000 currency note is embedded with a NGC (Nano GPS Chip)

How the embedded NGC Technology Works? The unique feature of the NGC is it doesn’t need any power source. It only acts as a signal reflector. When a Satellite sends a signal requesting location the NGC reflects back the signal from the location, giving precise location coordinates, and the serial number of the currency back to the satellite, this way every NGC embedded currency can be easily tracked & located even if it is kept 120 meters below ground level. The NGC cant be tampered with or removed without damaging the currency note/

How will this help eradicate black money menace? Since every NGC embedded currency can be tracked. The satellite can identify the exact amount of money stored at a certain location. If a relatively high concentration of currency is found a certain location for a longer period of time at suspicious locations other than banks & other financial institutions. The information will be passed on to the Income Tax Department for further investigation.

Just a beginning of the end of black money in India

Everything what you read above in this message was unofficial and was a hoax. It is hardly possible to get a GPS signal indoors, and the thing about the ‘reflective signal’ makes no sense as the only chips which can be powered by a ‘reflective signal’ such as RFID chips – are capable of transmitting data only over very small distances, so the thing about locating notes 120 meter below the ground level is false.

The image above displays what RBI has actually said about the Rs. 2000 note.