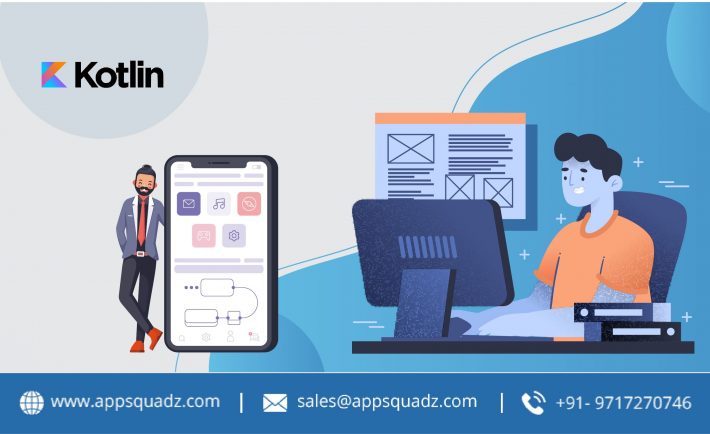 By May 2017, Google announced support for the all-new programming language Kotlin in the android mobile app development industry. Kotlin is a statically types programming language based over Java Virtual Machine expected to be a revolution in the Android app programming domain. It was not being used widely but google announced the official support to Kotlin. And the support turned its first-class android mobile app development language in 2017.

So, we will discuss in this latest blog post that, what is the world of Kotlin and how it excelled in the Android app development industry?

We know that Kotlin is called the future of android app development due to the power a smoothness introduced to the programmers they call it safer and to create reliable code. The Kotlin ensures to take less time in creating code and a developer would save time on repetitive code. With Kotlin language developer does not waste time in quality assurance and bug testing. Kotlin is highly capable of building bugs and crash-free reliable apps.

As we know that, Kotlin was created in 2011 by JetBrains – a Czech-based development company that develops IDE solutions for project managers and developers, and officially released in 2016. Initially, JetBrains wanted to solve its internal development problems in a conceptualized way that is why they made Kotlin public through open-source platforms. JetBrains team was looking for a java based modish language for android app development.

Java includes a huge amount of repetitive code to write simple tasks. It is very difficult to Understand the code what it is trying to explain and achieve. JetBrains decided to remove the inherent verbosity issue through Kotlin. More than 70% of the products from JetBrains are developed of java programming language, so it became very important to replace it and introduce a new language compatible with java with all modern features.

Developers ware very practical toward Kotlin before google announced official support to it. They thought about risks and other things. If Google changed the way of the android system, all apps written in unsupported language will not be functional. But google opened up the doors for Kotlin in May 2017 and raised the demand for Kotlin android developers globally.

Now, official support from JetBrains and google, Kotlin is widely adopted as a primary development language in android globally. Leading brands in the industry like, Pinterest, Basecamp, Uber, Evernote, and Pivotal are using Kotlin for android development and easy benefits.

Numerous coders, programmers, and developers adopted Kotlin worldwide in their startups because of the ease and compatibility with java. So that developer does not have to learn from the start they can merge and match it with java. The most amazing thing is Kotlin is not used in Android only, it can be used to develop the software that runs smoothly on laptop and PC also.

Pinterest: Introduced Kotlin and is being used by 150 million people every month

The Kotlin offers a huge number of advantages for you as a developer. A portion of the generalist benefits that Kotlin offers include:

Java and Kotlin can be bury worked. Kotlin is viable with all Java devices and systems making it simpler to relocate from Java to Kotlin. Additionally, the all-encompassing development condition Java and Kotlin guarantee together can grow the extent of programming in a solitary undertaking.

JetBrains built up a total Java-Kotlin converter that was incorporated into IntelliJ to spare developer’s time. This spares time during movement and recoveries the problem of retyping enormous measures of code.

Kotlin was created to take out the verbosity of Java language. This implies not, at this point a coder needs to manage a tremendous measure of dreary coding. With a brief, natural, and reduced coding sentence structure, Kotlin spares coding time and affixes the entire arrangement measure. for example, When App Lock mobile app was changed over from Java to Kotlin, there was a 30% decrease in incomplete lines of code. This shows Kotlin can diminish coding and sending time, incredibly.

Kotlin’s codebase is substantially smaller and clearer contrasted with Java. This leaves less space for mistakes and stable code. Additionally, the Kotlin compiler distinguishes mistakes at the accumulate time itself and not run time, making the last app considerably more steady and solid.

Level of perfection introduced in android mobile app development by developers at the company. Services in Kotlin language for Microsoft, iOS and android are available at best cost. Vast level resources available from the world class skilled team. Contact us now.