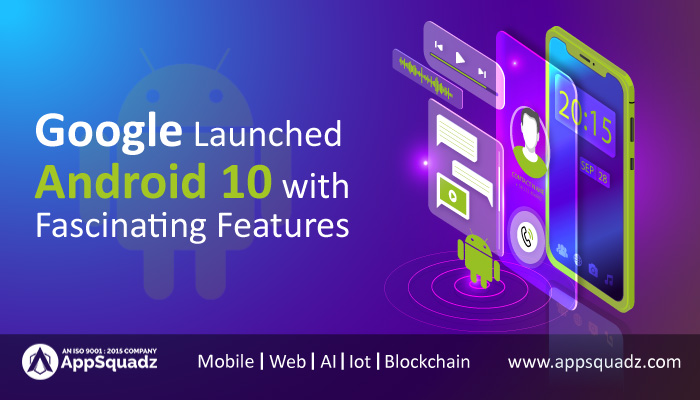 Google has finally launched the latest version of Android, and this version is expected to be hit amongst millions of android user. However, Android 10 is currently rolling out for Google’s Pixel, and soon other android devices will receive the latest version of Android in the near future. So, for non-Pixel users, the wait is going to be a bit longer. There are some fascinating features in the newer release of the Android, and these features could be a real game-changer for Google in its cold war with Apple. Let’s take a look at some of the fascinating features.

What are the new features on Android 10?

Probably, this was the most awaited feature on the Android platform. The good news is dark mode is finally available on Android 10. This is an integrated feature now, instead of app-based as it was previously. A user can simply activate it from settings, in accordance with the night theme. It looks cool, but at the same time, it is soothing to the eyes during the night time. As an android application developer, one can use this feature straightway in their apps as initially, this will be available only to the first-party apps.

You won’t believe that now your mobile OS is going to predict your reply to a particular message. So, it will predict, and if you like the predicted message, then you can reply with it instantly. Your messaging has got just smarter. This feature has been extended to other messaging apps as well, such as WhatsApp & Skype. Undoubtedly, it makes the user’s life much easier by saving some time. If you are a developer part of android application development team, then you can extend these features to your messaging apps.

This is definitely influenced by Apple’s gesture focussed platform. What does this mean for the users? This means that the “three buttons” back options are gone. Instead, there is a white bar at the bottom. If you swipe this bar up, it will go to the home screen directly. If you swipe the bar across, it is going to toggle between the apps. If you want the multitasking view, then simply swipe it up and then drag across the screen. For an Android user, it might take some time to get used to this cool new feature. But, for someone who is switching from Apple to Android, it should be tad easy.

You might have heard about the digital well-being suite previously, the focus mode is just an improvised extension of that suite. This mode allows the user to focus on a specific app, by greying out the other apps which might distract. Even the notifications of the greyed-out apps will be hidden. This mode also has parental control. It must be noted that parental control previously was not integrated with the platform. Instead, it was available as a separate feature. There are other features available in digital well-being suite, and we hope those features are also under focus mode in a given period of time.

How many times it has happened to you that you are accessing a webpage and the Wi-Fi connection has gone down? It is a common scenario. The solution would have been going to settings and turn on the mobile data. Then finally you come back to the browser and start browsing. With Android 10, you don’t need to do this. In case the connectivity is not there, the browser pops up the settings screen automatically, prompting you to change the connectivity option. This is a cool new feature on Android, where the apps can automatically call the settings panel, whenever it is required. Again, iPhone users would say, this option is already there in iOS. This is important for the Android app developer as well, as he can incorporate this cool feature in his new app.

We get a standard depth format on the new platform, which is referred to as Dynamic Depth Format. This can help in tweaking the metadata related to the depth of the image. For a user, it might not be a useful feature straightaway. However, for a mobile app development company that is developing apps-based image editing, could open up a lot of opportunities. One can get the bokeh mode and other forms of blurs, by merely tweaking this option. This is possible even though the mobile camera doesn’t support it.

One can share the Wi-Fi credentials in the form of QR code. This is definitely not a brand-new feature, as a native interface of Huawei, as well as Xiaomi, already has this option. It is just Google adopted it as a standard feature on its platform. But there is no doubt that this is going to be a handy feature for the users.

Android 10 has got cool new features, which are beneficial to both the users as well as the developers. The new Android platform has become more intuitive and user-friendly. On a different note, it seems Android has been trying its best to catch up with the iOS platform. Even though the new platform brings in a plethora of improvement, users will take some time to get used to some of these cool features. One of them will be discontinuation of the iconic back button, which has been there since the inception of the platform itself.