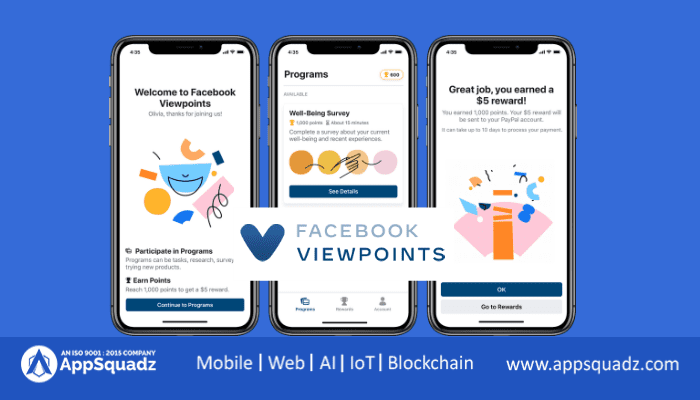 In consonance with Facebook’s official blog, this all is going to take place:

This time, Facebook has promised it will gather the least amount of data needed to help users in building better products. The goal apparently will be to locate which apps and features Facebook must copy, buy, and what is to be ignored. Periodically, the company will remind the participants to review the information they share with Facebook.

Here is the data Facebook will gather and interpret:

Facebook’s Viewpoints, a new market research app launched by Facebook a couple of days ago, a couple of months after the organization introduced the Android data collection app named Study. The app is designed with a view for monitoring what and to which extent the users can access different software on the Google-owned operating system.

Both applications have a dubious history. Facebook had to shut down a market research app in January, the app which the company introduced as a virtual private network (VPN) provider in the market. It was advertised to teenagers, and it employed a special software certificate that Apple gives to businesses. It was chiefly structured to authorize the distribution of internal apps within the employees only (no general public to be involved).

Facebook was using it for installing software on the phones of teens along with the survey partakers for collecting the information which the organization generally could not ask for, employing its basic iOS applications. The app would have overlooked Apple’s principles for the App Store. However, to distribute the software outside the standard iOS model, Facebook was using an Apple-provided enterprise certificate.

Apple drew the organization’s enterprise privileges of Facebook for violating the guidelines, and as a result of which Facebook has shut down the application, named Facebook Research VPN, for appeasing the makers of the iPhone. Even last year also, Facebook had to shut down a similar VPN app referred to as the ‘Onavo Protect.’ The app was shut down after Apple said the app is violating the standard App Store data collection rules.

Facebook’s examination endeavors presently live on in Viewpoints and Study. With Viewpoints, Facebook is not peering into how you utilize third-party applications. Instead, it is an app that will give you rewards for filling the surveys, testing new items, and much more. As per Facebook, the first survey is the “Well-Being Survey,” which will take around 15 minutes and acquire you 1000 “points,” which means $5 that will be paid to you through PayPal.

Facebook appears to have taken a few reactions of its past market research app to heart, as Viewpoints is open to individuals of 18 and above in the US with Facebook accounts. Still, when some of you try registering a Facebook account on the iOS version of the app, you may receive a pop-up message of ‘not available to you at this time,’ so it seems that some people probably won’t qualify all requirements for the current survey. Facebook says that it intends to give “extra ways for individuals to get you enrolled” and to extend the program to different nations next year. The company also stated it wouldn’t share information from the application to third parties. Along with that company also promised that it would not share your Facebook Viewpoints activity on Facebook.