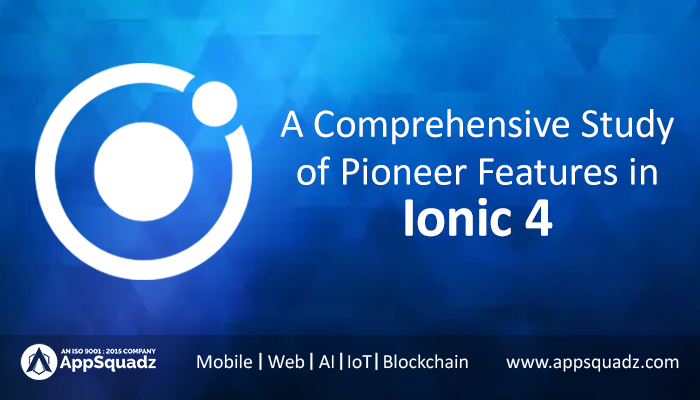 With the all-new features that push it beyond the front end framework, Ionic 4 is one of the most dependable frameworks. It is an excellent choice for creating PhoneGap applications, prototypes before building the native applications, and HTML5 app development. Over years of research and consistency, ionic has upgraded itself to a powerful user interface and app framework.

With the latest release, it is a set of web components with custom elements along with the shadow DOM application program interface in all most recent browsers. This allows all web developers to use standard web API’s so that the Ionic component API’s stay stable without getting affected by the frontend and framework opted.

There are the latest advancements in the framework as follows:

With the most recent set of web platform APIs developers can produce new custom, reusable and encapsulated HTML tags for web applications and pages. These web components have custom widgets that can be used with any JavaScript library or framework to work with HTML across the latest browsers. The web components have less of written code and improved startup and load time that improves the performance of Progressive web applications.

The web component’s custom elements allow modernization of HTML by creating new tags and makes way for designing new DOM elements. The Shadow DOM that develops component-based applications fixes the CSS and DOM. The stencil is the new web component compiler that can work with or without any other front- end framework and makes use of any addition API’s like Typescript, Virtual Dom and so on.

Ionic Four is designed to build high performance oriented PWA’s which ensures the components are packed tightly in sets of collection for asynchronous component loading and delivery.

CSS custom properties have provided structure to the developers to upgrade the customized Iconic components in future without having compatibility issues. It also offers public theme API that allows to theme the apps irrespective of the frontend framework used in the app. With this facility the developers no longer have to alter the inner CSS styles; on the whole, changes can be made easily by modified CSS custom properties.

The latest framework works well as an individual web component library or by integrating JavaScript frameworks. It is expected to incorporate more frameworks in the coming future. It can make regular internal improvements without the need for respective updates in any other integrated framework.

CLI is a tool that aids the developers by allowing them to choose any framework while developing a new project. It has a built-in development server, debugging tools. It also helps in administering the developer’s account, other deployments and manages cloud builds.

The latest version uses native Angular Routing, besides putting the components into ion-nav, now the components have to be mapped to routes. With an ion-router single element, it can control all communications with the browser history. Ion-router-outlet and the Angular router are used for Angular projects.

A Brief Comparison Between Ionic 4 vs. Ionic 3

On evaluating a large number of a new component developed using the latest technology like ion-backdrop, ion-picker, ion-ripple-effect, ion-route and so on it is found that performance has improved along with customized themes and UI by 1.5 times than the previous version. New web components are developed using Stencil are top scorers on the Lighthouse Benchmark tool by Google.

With power packed changes like the use of Stencil along with the use of any other framework besides Angular, version 4 is a success. With the pioneering features, it has managed to revolutionize the ionic framework development. Contact our mobile app development company for progressive web development, cross-platform applications for mobile and desktop platform now!