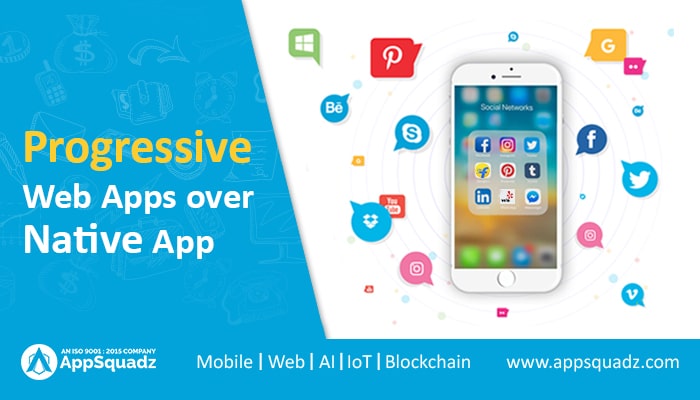 According to the data from Statista, nowadays, mobile currently accounts for over 60% of total internet usage. The chief reasons for it are ease in accessing the internet, portability, and cheap hardware. In this situation, UX obtains huge significance, and progressive web apps can aid in enhancing UX as they optimize websites on Smartphones. Flipkart, Twitter, Pinterest, and many more big businesses generated progressive web apps. These PWAs integrate characteristics of the web along with the mobile app, delivering the native or hybrid app-like User experience. Applications that offer an optimized website for mobile devices are referred to as Progressive Web Apps.

PWAs give access to the users to content via browsers and let users download the content whenever and wherever they browse. Native app development is suitable for a specific platform, whereas Progressive web apps are devised for usage in a browser. PWAs function similar to native apps almost, but they don’t command the complete hardware of the device.

Numerous well-established businesses adopted PWAs. The following case studies will present you with a better insight into the effectiveness of Progressive Web Apps.

Twitter ranks amongst the most popular social apps, with 328+ million users per month, and approx 80% of them access Twitter on mobiles. In April 2017, Twitter named PWA the default mobile mode for producing mobile quicker and more trustworthy for users.

Doing this, they realized:

Moreover, as PWA is just 600kB compared to the downloaded version, which is 23.5MB, Users save on their data plan with Twitter Lite. It takes only 5 seconds on a 3G network if you are downloading the first time and the app loads in less than 3 seconds for each return.

Pinterest is an image-based platform; assists users in making their catalog of ideas and has more than 200 million active users each month. In order to enhance user experience and augment the conversion to higher than app installation, the application development team revised the mobile website as a PWA.

They got tremendous results:

Flipkart decided to close their mobile website tentatively and offer an app-only interface when India’s largest e-commerce website suffered the issue of addressing users with seamless experience because of various variables of network connectivity. They rethought their strategy and developed Flipkart Lite, a progressive web app as the PWA features replicated the native experience, and the consequences were significant.

PWAs may not be a good option for the business whose customers don’t visit their website often as the app is not evident on app stores. Users become urged to download PWAs only if they are on the home screen. You must consider these points before deciding whether to go for Progressive Web Apps or not.

How Do Progressive Web Apps Work?

Native apps can work without an internet connection as basic elements like UI components and data are stored on the device when a user downloads and installs them. The same goes with PWAs as well. By saving CSS files, HTML files, and images in the cache of the browser, Service Workers can be employed to provide developers full charge over the network call. When a user visits a website more than twice or thrice times, it implies they are interested in seeing content from the specific page. Browser is authorized to verify if the user visits adhere to decided frequency standards, following which the user gets a message to preserve the website as the app on the home screen. The user can visit PWA any time once the site is collected, even if they are offline, giving them a responsive and fast experience.

With a responsive design, the mobile web experience has been significantly enhanced. However, many website designs are not conceived as mobile-first as of which the experience lags in terms of speed where PWAs can help you to bridge the gap. Undoubtedly, Native apps provide a superior experience on mobile, but until your app stands amongst the top in its category, the high development and management cost is justified.

Progressive Web Apps: The Future for the Web

Despite the growing prevalence of native apps, there are numerous causes why Progressive Web Apps will be the future of the web.

The main advantage of PWAs is they rank in search engines, making it simple for businesses practicing SEO services for their website ranking. New apps won’t have the harm of the shortage of reviews/ratings, as well as the link of the website can be shared efficiently.

Native, React-native or PWA, what to choose?

All frameworks have pros and cons that are to be evaluated before deciding on the most suitable option for your app.

What features should Progressive Web Apps have?

Let’s see why web app developers are talking about progressive web apps being the future of mobile and the ones which are missing in non-progressive apps. Following are the features making the experience much better:

Technical components that form the foundation of PWAs

PWAs demand some components that run in sync to power them, which include Service Worker, Manifest file, and HTTPS.

If you are a business owner or an entrepreneur, this blog will help you allocate, which is better for your business. Progressive web apps have a bright future in the tech world, and this could be observed as businesses prefer Progressive Web Apps over Native apps. Before heading towards progressive web apps development, contact a mobile application development company that understands your client’s needs and your business needs. The company must be such that it can recommend the best framework for developing your app as per your budget and app strategy.