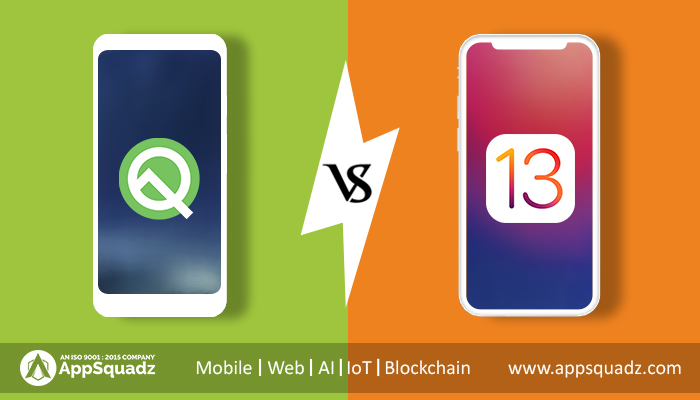 The two most popular platforms, iOS, and Android are contesting ever since their genesis. Both the platforms are always in constant debate as and when new iOS and Android operating systems are launched every year by Apple and Google. None of them is in the shade due to the launch of a new feature in an opponent’s platform.

The consistent strife among the two platforms leads to the development of new features without fail, and their launch in the market makes it challenging for iOS and Android app development companies to figure out which is better. As per the latest trends and features prevalent in the market, there is similarity in the list of features found in both the apps developed by the iOS and Android app developers. The latest software updates of both, i.e., Android Q and iOS 13, which are in beta stage as of now launched by Google and Apple respectively, are currently in the market. The mobile phones are a slab of metal and glass without the operating systems that powers them.

The iOS 13 in its beta version is only available to developers yet with a dark mode for the whole system, better control on the privacy settings and scads of improvements made to make iPhone secure and convenient to use. In comparison, the Android Q also offers the dark mode along with an emphasis on the privacy issues with artificial intelligence enhancements. So the comparison is on the features that were revealed by Apple at the WWDC 2019 along with the features released by Google so far. A few of the most important features of both platforms are discussed below.

So far, the privacy is concerned; this has been the selling point of Apple for so many years. Apple declared at WWDC that since its business is not like that of Google that depends on the user data and targeted ads, it will provide its customers with better location permission services while using apps, that will allow the user to choose to share the location once and again ask the user next time whenever the location is required. Likewise, Apple’s new method to sign in will let the user sign in incognito to websites and apps without being trailed.

Whereas with Google, as its significant way to generate revenue is through ads that take into account the user search, for instance, what website they look for, etc. So in the Android Q, it has taken a significant step to enhance the privacy of the users by letting the users control what information they want to share via apps and various services.

The dark mode is favourable; the reason being it saves the battery life as it needs to light up fewer pixels along with reducing the strain on the eyes. The Android Q, unlike the previous update of Android Pie, has the dark mode evenly distributed on the mobile operating system and allows the user to switch between the bright white screen and the dark mode.

Apple, on the other hand, has a dark mode for its mobile operating system in iOS 13. The dark theme mode, as declared at the WWDC is available in wallpapers, notifications to widgets, calendar to messages offering a consistent dark experience for its users.

In Google’s photo service, there is everything that is required. With 15 GB of free online storage, the powerful editing tools along with effortless backup and photo sharing, Google offers a perfect photo editing tool. The night site also uplifts the scale to Android. Being a Google tool, it is easy to look for people and places on assigning the tags to the photo.

Apple, on the other hand, comes with a productive photo editing tool, and in iOS 13, the tool can adjust the portrait lighting with the help of the slider. With the ability to recognize faces, objects, and scenes, it helps the user to sort all the images along with the 5 GB of free iCloud storage space.

iMessages and Facetime or Google’s Duo and Hangouts

Apple offers its users end to end encrypted communication facilities via FaceTime and iMessage. The quality of video and text chat and seamless messaging among the iOS and macOS devices cannot be surpassed by any other platform so far.

Google provides messaging apps on Android like Duo, Hangouts for voice and video calling, Google Voice for voice calls again, Messages for chat or text message. Hangouts website offers to message on Mac or Windows devices along with the web version of the app.