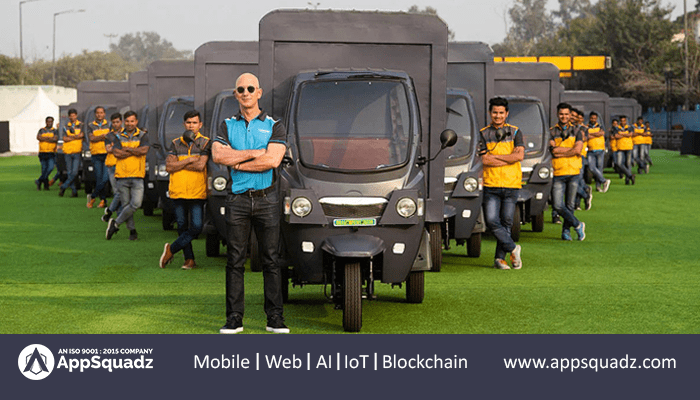 This Monday, Amazon India announced it has begun to work on its electric vehicle (EV) delivery fleet in India that intends to introduce 10,000 EVs on the streets by the end of 2025. Isn’t it amazing? This move has been initiated as part of the company’s global Climate Pledge, as declared in September 2019. Additionally, the overall pledge endeavors to introduce one lakh electric delivery vehicles in action globally. This way, the move in India is the initial step towards accomplishing that object.

Talking about the initiative, Amazon’s CEO Jeff Bezos in the morning itself announced the company’s plans via a tweet. He tweeted, “the company has started to roll out its fleet of electric delivery rickshaws. Fully electric. Zero carbon. #ClimatePledge.” Moreover, the tweet by CEO Jeff Bezos also includes a video where he is riding an electric rickshaw. His tweet indicates that electric vehicles such as e-scooter and rickshaws will be eco-friendly with zero carbon.

In one of the press announcements, the company also admitted that they are planning that by 2025, the 10,000 electric vehicles are in action which would include the three-wheelers as well as the four-wheelers. Additionally, the company also revealed that in the current year, i.e., 2020, these EVs would be in action across 20 Indian cities. The cities include major cities like Ahmedabad in Gujarat, Bengaluru in Karnataka, Coimbatore in Tamil Nadu, Delhi NCR (National Capital Region), Hyderabad in Telangana, Nagpur, and Pune in Maharashtra.

The company continued, it has been working with a range of Indian OEMs to manufacture and design the fleet of electric vehicles, ensuring viability & secure deliveries. As a part of the global Climate pledge, Amazon declares that the company has its plans to introduce 10,000 electric vehicles that will be in action by the end of 2025. Furthermore, for long-term purposes, the company is planning to launch one lakh electric vehicles into its delivery fleet by 2030. The electric vehicles would preserve the earth from four million metric tons of carbon every year by 2030- the company further stated. Notable growth in the Indian e-mobility industry in the past times has directed to high-level innovation in technology, and more reliable motor including battery elements.

Besides, the company in its press statement also said, “the government’s focus to promote the acceptance & adoption of electric vehicles in India, and initiatives on establishing the charging infrastructure with the FAME 2 scheme urged the company to stimulate and outline its concept for electric vehicles in India. Talking about the rollout, Vice President, Customer Fulfillment – APAC & Emerging Markets, Amazon, Akhil Saxena quoted, “At Amazon India, we are committed to building a supply chain that will minimize the environmental impact of our operations. The expansion of our Electric Vehicle fleet to 10,000 vehicles by 2025 is an integral milestone in our journey to become an energy-efficient leader in the industry. We will continue to invest in the electrification of our delivery fleet, thereby reducing our dependence on non-renewable resources.”

This initiative of Amazon India not only helps people efficiently travel from one place to another but will preserve our globe.